TXT all set to promote their English track ‘Magic’ in US, schedule out

The fastest-growing K-pop band TXT is all set to promote its new English track ‘Magic’ in the US while it makes history on Hanteo charts alongside major South Korean bands.

It has only been two years since the debut of TOMORROW X TOGETHER and they are considered to be one of the fastest-growing fourth generations of K-pop groups.

From being the first boy group to chart on Japan’s Line Music Daily Chart for five consecutive days to make a record on the billboard. Their fandom, MOA’s have showered incredible love to their latest release The Chaos Chapter: FREEZE.

On June 6, they released a promotion schedule on Twitter for their all-English track ‘Magic‘ from their recent album.

Check out the schedule given below: 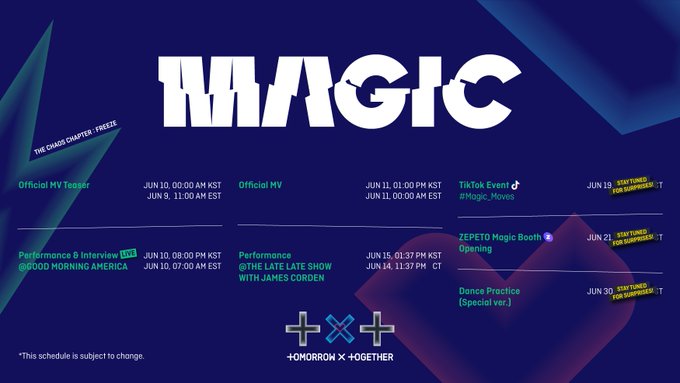 The schedule has a lot of surprises for MOA’s like the TikTok event, a ZEPETO Magic Booth, a Dance Practice Video, an Interview with Good Morning America, a performance on “The Late Late Show with James Corden” and more.

The band has achieved the sixth-highest first-week sales of any K-pop boy group in Hanteo history—following BTS, SEVENTEEN, NCT DREAM, EXO, and NCT.

How excited are you? tell us in the comment section!