It all started when Jack Dorsey invited his followers through a link to a Bitcoin event, sharing Bitcoin development community.

“As more companies and institutions get into the mix, we all want to help protect and spread what makes #bitcoin open development so perfect. This day is focused on education and actions to do just that,” he tweeted.

There’s more to it. Taking Elon Musk’s humorous reply a step forward, Jack Dorsey further invited him to chat at the event, and wrote-

However, his replies prompted end number of replies from Elon Musk. At some point Jack Dorsey also tagged Peter Schiff – Chief global strategist and CEO of Euro Pacific Capital to join in the conversation. 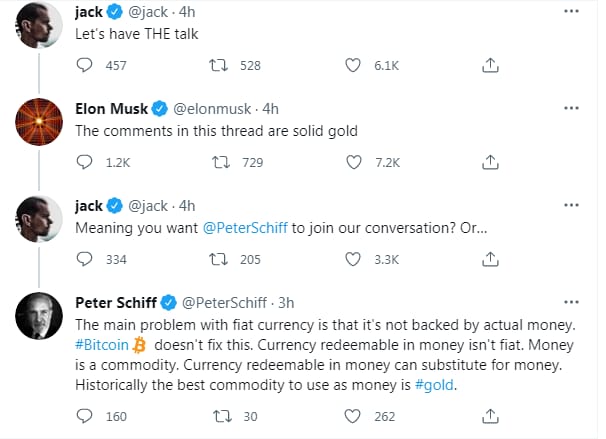 The chat between the two personalities had to go viral, as both Tesla CEO and CEO of Twitter, are fan of Bitcoins. Musk is known for posting memes relating to cryptocurrency and has also earned the title of ‘Dogecoin’. Whereas, Dorsey has been an open advocate for Bitcoins on social media and he is also scheduled to be speaking at ‘The B Word’ event.

Pushkar Singh Dhami to be the new Uttarakhand CM, here’s all you need to know…