IPL 2021: David Warner shares an Instagram story after being fired as SRH captain

David Warner has been through a difficult week. He was relieved of captaincy by the Sunrisers Hyderabad management due to weak performance in the ongoing IPL 2021. He was also forced to warm the bench during SRH’s match against the inaugural champions, Rajasthan Royals.

Though current New Zealand captain Kane Williamson has been appointed Warner’s replacement for the rest of the season, Afghan all-rounder Mohammad Nabi replaced him in SRH’s playing XI on Sunday.

Meanwhile, Australia’s explosive opener has posted a heartfelt message on social media, and it has all to do with Hyderabad.

The 2015 World Cup winner recently posted a story on his Instagram account in which he shared a picture of the Hyderabad stadium, which also happens to be the home stadium of the 2016 World Cup champions, and said, ‘We miss playing here.’

The southpaw was talking to the fans, because he allegedly misses the chaos and electrifying energy of the audience because the tournament is being held behind closed doors due to the worldwide pandemic. 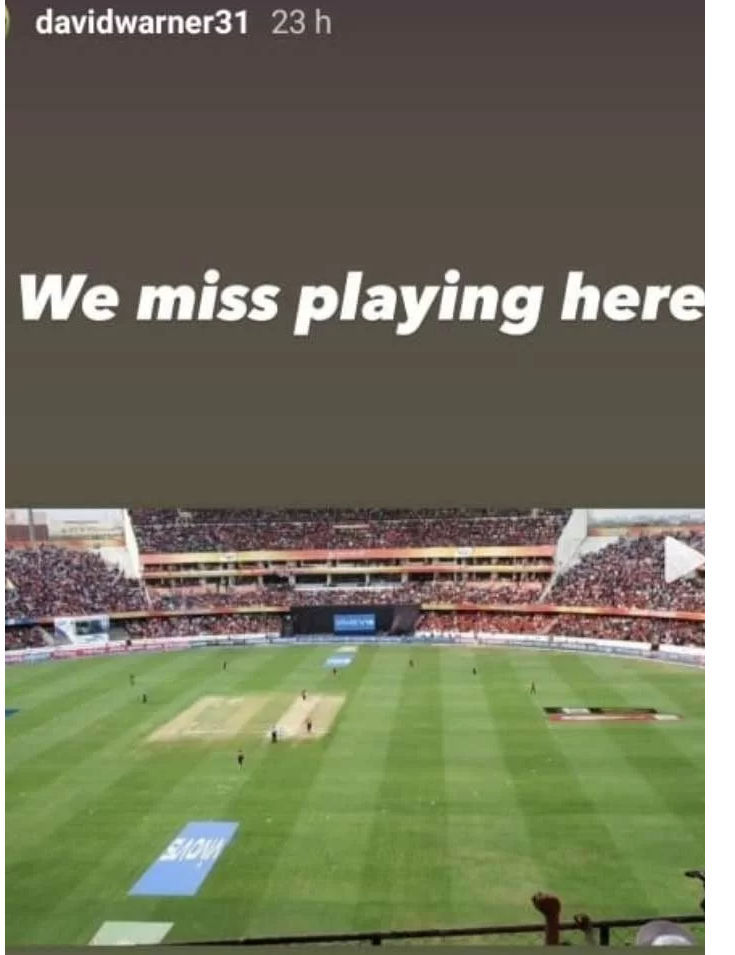 Why was Warner left out of the SRH Playing XI versus RR?

In response to Warner’s omission from Hyderabad’s playing XI against Rajasthan, Sunrisers Hyderabad Director of Cricket Tom Moody said that they had to make a difficult decision, and in the end, someone had to miss out, which unfortunately happened to be the former Australian vice-captain.

“We had to make the hard call. Somebody has to miss out and unfortunately for Davey on this occasion it’s him,” said Moody ahead of the RR-SRH clash”.

'David Warner will not feature in today's game. The decision is purely based on team combination.'

David Warner’s services to the SRH team as captain and batsman:

Meanwhile, as commander of the Orange Army, the southpaw has made an enormous impression. Since the 2016 season, SRH has made it to the playoffs on a consistent basis under his leadership. They secured their first championship in 2016, and it was followed by two fourth-place finishes (in 2017 and 2019), as well as a third-place finish (2020).